NALSAR University of Law, or officially the National Academy of Legal Studies and Research (NALSAR), is a premier legal studies institution located in Shamirpet, Hyderabad, Telangana, India. It was established in 1998 as a state university by an Act of the State Legislative Assembly (Act 34 of 1998) and has since then maintained its coveted position over and above all law schools in India. The university which is fully residential and conducts teaching in law, is ranked as the best law school in India by India Today magazine in 2013.

Admission to NALSAR is extremely competitive. The Common Law Admission Test (CLAT) serves as the qualifying examination for the university. In 2015, for the B.A, LL.B (Hons.) program, a total of 40,000 students contested for a mere 65 seats, making the examination one of the most competitive in India. However, since 2015, the intake has been increased to 120 students per year, in compliance with the BCI norms.

The university is famous for its prestigious undergraduate program which forms the core of its academic and co-curricular excellence. NALSAR offers a five-year integrated B.A LL.B.(Hons.) program. Admission to the undergraduate program is on the basis of the highly competitive national-level Common Law Admission Test (CLAT). In 2013, of the roughly 27,727 candidates who wrote CLAT, the top 104 ranks were offered admission to the college under the general category- an acceptance rate of 0.39%-

NALSAR offers a one-year postgraduate LL.M. program. 50 students are admitted through CLAT with ten more spots allocated to foreign nationals. About ten areas of specialization are offered, and the program requirements include a dissertation.Additionally, two-year (four semesters) self-financed master's degree in Business Laws and Administration (MBLA)is also offered by the University apart from a one-year Master of Philosophy (M.Phil) which is open to candidate with an LL.M. degree,and a Doctor of Philosophy (Ph.D).As a first among the Indian National Law Universities, starting academic year 2013-14, NALSAR now also offers a two-year M.B.A. program.

Similarly, CASL has introduced innovative courses in Aviation, Space, Telecommunications, GIS and Remote Sensing. Its objective is to cater to the unprecedented growth and commercialization of the Aviation, Space and Telecom sectors. CASL’s initiative aims to institutionalize an academy-industry partnership in these sectors- a first of its kind, not just in India but perhaps in the entire Asia-Pacific Region. It offers the following two degree courses: Master’s Degree in Aviation Law and Air Transport Management (MALATM) and Master’s Degree in Space and Telecommunication Laws (MSTL).

India Today ranked NALSAR as the best law school in India in the latest 2013 ranking.NALSAR was ranked first by Outlook in 2012. NALSAR was previously ranked second in 2010 and 2011. India Today had previously ranked NALSAR as first in 2011 and 2008.By popular estimates and rankings, NALSAR Hyderabad, and NLS Bangalore are together considered to be the most prestigious law schools in India. 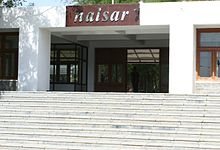 Entrance to the Academic Block

The law school is divided into five precincts. The first is the Administrative Block which is adjoining the Academic Block. The Academic Block consists of the classrooms, conference halls, the library, the internet centre, a moot court hall, and research centres. The residential block consists of five separate hostels for boys and girls each. The entire campus is WiFi network enabled.The stadium forms the fourth while the law school dining hall forms the fifth. Miscellaneous structures include the commemorative 'Keerthi Stambh' and a replica of 'The Thinker' by Auguste Rodin. An auditorium, with a seating capacity of close to 500, has also been completed. 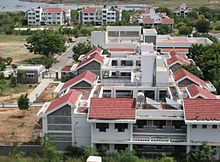 NALSAR's library has a collection of more than 27,000 items comprising law reports, reviews, periodicals, manuals and choicest publications of textbooks and other resources. The Law Resource Center is the hub of all library activities and aims at fulfilling the research and academic objectives of the university. Its rich collection of primary and secondary legal resources is accessible to all the users in the campus. The VPN-configured Online Public Access Catalogue (OPAC) is accessible from any terminal in and out of the campus. It is designed to provide online information on availability of titles, and to allow the patrons to request for items that are on loan, renewal of books, access to patron accounts and other information services. Unlike the traditional OPACS, each record provides bibliographic information with hot links to table of contents pages, reviews, publishers' notes, and peer driven reviews and ratings.The library has a depository of UN collections. A separate section houses all the proceedings of the organs of the United Nations. The print collection is augmented by online access. 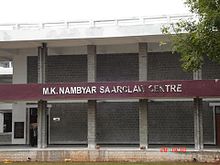 Nalsar students have excelled in mooting at the national and international level.

NALSAR won India's oldest Parliamentary Debate at St. Stephens College, Delhi in December 2005. This was followed by victories at the Annual Parliamentary Debate held at the Indian Institute of Technology, Madras in January 2007 and 2009, the debate conducted by the Indian Institute of Information Technology, Hyderabad in February 2007, and that of the Young Orators Club of Secunderabad in 2008. NALSAR further cemented its reputation on the debating circuit by winning the inaugural IIM Bangalore Parliamentary Debating Championship 'Cicero' in January 2009.

The NALSAR Intervarsity Debating Championship is the pioneer of the British Parliamentary Debating format in India. The idea for the NALSAR IV was born to introduce the British Parliamentary debate format to the national debating circuit and provide a preparatory ground for the WUDC (World Universities Debating Championship), the most prestigious debating championship in the world. Thus, the NALSAR IV is aimed at exposing debaters to the most competitive standards of adjudication. The NALSAR IV has now earned the name to be one of the most prestigious debating championships in India.

Over the past many years, NALSAR has been very active in the Hyderabad and Indian quizzing circuit. Teams representing the university have won a number of inter-college quizzes in the twin cities, and across India.The college has a strong quizzing base and sees quizzes being hosted within the college regularly from time to time. Achievements by quizzers from NALSAR include finishing as runners-up in the K-Circle India Quiz 2010 and 2011, as well as winners in BITS Pilani-Hyderabad Campus' annual fest Pearl 2012, 2013 and 2015. A 4th year team won the Best College Team title at the Landmark Quiz held at Hyderabad on 6 October 2013, something which has also been won by NALSAR before. NALSAR also finished second in Manipal's Quiz on The Beach 2015 and Tata Crucible Hyderabad 2015. A team won the Economic Times in Campus Quiz for two years consecutively in 2014 and 2015. The university has also become host to one of India's largest college QuizFests, titled 'Interrobang', which will be in its third edition in March 2016.

Prof. Singh’s contribution in redesigning legal education in the country has been significant while he was a member of the Legal Education Committee of the Bar Council of India. His legal writings span the areas of Jurisprudence, Human Rights, Legal Education, Legal Aid, Personal Laws and Justice Education and has more than 50 research publications to his credit. He has edited two publications one on “Human Rights Education, Law and Society” and the other on “Cyber Space and the Law – Issues and Challenges”. He has also authored along with Prof. A. Lakshminath two scholarly publications one on ‘Fiscal Federalism – Constitutional Conspectus’ and the other on Constitutional Law. Under his guidance several scholars have been awarded Ph.D. Degree and his rich teaching / research experience enabled him to visit and participate in several International Conferences and Seminars and present papers in several countries which include Australia, Brazil, Bhutan, China, Taiwan, South Africa Cyprus, Canada, France, Hong Kong, Israel, Italy, Pakistan, Switzerland, Sri Lanka, Singapore, Thailand, USSR, U.K. and United States of America,. He has visited best of law schools in U.K. and USA and interacted with leading legal academics and functionaries of higher judiciary in these countries.