Jadavpur University is a public state university located in Kolkata, West Bengal, India.It has two campuses: the main campus at Jadavpur and the new campus at Salt Lake, approximately 12.6 kilometres (7.8 mi) and 8.8 kilometres (5.5 mi) from the city centre respectively. A third campus is scheduled to open at the site of the erstwhile National Instruments (CSIR India), opposite the main campus along the Raja S.C. Mullick Road. It was upgraded to a full-fledged university in 1955. Before 1955 the Diplomas Awarded by the National Council of Education Jadavpur were Not Recognised as equivalent to Degrees by the Government of India.

University of Calcutta is one of the three universities in modern India, the other two being Bombay (now Mumbai) and Madras University. It was set up by the British in Calcutta in 1861 as a means of spreading western philosophical thought among the elite in India. It also aimed to create, in the words of Lord Macaulay, "a class of persons Indian in blood and colour, but English in tastes, in opinions, in morals and in intellect." This initiative was furthered by the passing of the Universities Act of 1904. This resulted in the reorganization of the Calcutta University's Senate and Syndicate by the nomination of more white members into them, which in turn would enable the government to control its policies. The government also decided to disaffiliate many private Indian colleges, which had come up lately and were regarded by the government as hotbeds of nationalist agitation. The measures stirred the educated middle class to move for alternative systems of education. Even the diplomas awarded by Jadavpur University were not recognised by the UGC / Govt. of India in the past until it was upgraded to a university in 1955. Its diploma awarded by National Council of Education was not recognized til 1954.

The nationalists in the freedom struggle of India dubbed the Calcutta University, another pillar of India's education movement, as "Goldighir Ghulamkhana", or the slave house of Goldighi, with reference to the lake adjacent to Calcutta University, and the number of graduates it churned out who were used in the British era as ICS officers. Hence, the need for setting up an institution which would impart education along nationalist lines was strongly felt by the luminaries of the period. The real impetus though was provided by the partition of Bengal by Lord Curzon, the then Governor-General of India, into East Bengal on the one hand (the area that was eventually to become Bangladesh in 1971) and West Bengal and Odisha on the other. The young men of Bengal were amongst the most active in the Swadeshi movement, and the participation of university students drew the ire of the Raj. R.W. Carlyle prohibited the participation of students in political meetings on the threat of withdrawal of funding and grants. The decade preceding these decrees had seen Bengali intellectuals increasingly calling for indigenous schools and colleges to replace British institutions.

On 16 November 1905, the Landholders Society organized a meeting at Park Street, attended by around 1500 delegates, including Rabindranath Tagore, Aurobindo Ghosh, Raja Subodh Chandra Mullick and Brajendra Kishore Roychowdhury. The idea of the National Council of Education was mooted here. While in a meeting held on 9 November 1905 at the Field and Academic Club, Subodh Chandra Mullick pledged Rupees one lakh for the foundation of a National University in Bengal. The objective in setting up the institution that was to challenge the British rule over education by offering education to the masses 'on national lines and under national control'.

Generous sums of money were also donated by Brojendra Kishore Roy Choudhury, Maharaja Suryya Kanto Acharya Choudhury and Rashbihari Ghosh, who was appointed the first president of the university. Aurobindo served as the first principal of the college. The organisation in its early days was intricately associated with the nascent revolutionary nationalism in Bengal at the time. It was during his time as principal that Aurobindo started his nationalist publications Jugantar, Karmayogin and Bande Mataram.

The students' mess at the college was frequented by students of East Bengal who belonged to the Dhaka branch of the Anushilan Samiti, and was known to be hotbed of revolutionary nationalism, which was uncontrolled or even encouraged by the college.

Almost on the same day that the National Council of Education was set up, a rival organisation, the Society for Promotion of Technical Education in Bengal, was set up by Taraknath Palit. The Bengal Technical Institute came into being on 25 July 1906 under the umbrella of the SPTE, with the objective of spreading technical education among the masses in West Bengal, one of the eastern region states of India. 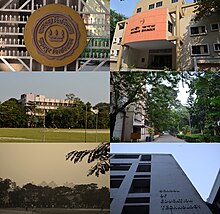 The two organizations fought it out for a few years until the SPTE was amalgamated with the NCE in 1910 and the Bengal Technical Institute passed into its hands. In 1921 the institute became the first in India to introduce Chemical Engineering as a discipline. By 1940, the institute had outgrown itself as more than just a small institute and was virtually functioning as an independent university.

After Indian Independence in 1947, the West Bengal State Legislature, with the concurrence of the Government of India, enacted the Jadavpur University Act, 1955 to convert the institute into Jadavpur University with full autonomy on (24 December 1955). Since then the university has observed this date in its calendar as Convocation Day.

Jadavpur University has had its share of ups and downs since its formation as an autonomous university. This period has seen the university's growth as one of the foremost centres of the excellence in the country, but this period has also seen it being affected by Naxalite violence that claimed, among others, the life of Prof. Gopal Chandra Sen, who was the vice chancellor of the university at the time of his death.

The emblem of the university is a three-flamed lamp encircled by lotus petals. The lamp represents knowledge. The three flames represent intellectual training, cultivation of emotions and imagination, and spiritual development. The petals of the lotus on the periphery represent fine arts and culture. The emblem was designed by Nandalal Bose, a key member of the Bengal School of Art, who was one of the great masters at Kala Bhavan in Rabindranath Tagore's Visva-Bharati University in Santiniketan. As the university celebrated its Golden Jubilee on 24 December 2005, the emblem was created to commemorate the occasion, and the motto 'To Know Is To Grow' was coined. This date was also the centenary of the National Council of Education.

The main campus of Jadavpur University is bordered by the Raja S.C. Mullick Road, the Jadavpur Station Road, the Kolkata Suburban Rail, South Line and the Central Glass and Ceramic Research Institute (CSIR India). The present campus was first leased to the NCE in 1922 by the Calcutta Municipal Corporation, when Deshbandhu Chittaranjan Das was the mayor. On 11 March 1922 the foundation stone of Aurobindo Bhavan, which is currently the main administrative centre of the university, was laid. The seat of engineering was shifted to the Aurobindo Bhavan in 1924 when the building was completed.

The Jadavpur campus houses most of the departments of the three faculties — Engineering, Science and Arts — in addition to the Jadavpur University Central Library and the Blue Earth Workshop. It is adjacent to research institutes like the Indian Association for the Cultivation of Science, Indian Institute of Chemical Biology and the Central Glass and Ceramic Research Institute.

The architecture of the campus is typical sub–continental in nature with flat-roof rectangular plans. Some of the older buildings, especially in the engineering faculty and the Aurobindo Bhavan in particular, have a strong Bengali influence which can be seen in the design of the pillars and the wooden doors and windows.

Landmarks on the Main Campus

Some of the prominent landmarks on the engineering side include the Blue Earth Workshop — which, in addition to being among the foremost centres of learning techniques in workshop technology, also has the dubious distinction of having been used by students affected by the naxalite violence to manufacture blow guns, the "gachchtola", the "jheel paar", ashirwad canteen (now converted into the SURUCHI canteen), the windmill and the "green zone".

On the arts and science side, some of the prominent landmarks include the English department "ledge", the "Bhanga Bridge", worldview bookstore, Open Air Theatre and "Milan Da's" canteen.