The Indian Institute of Technology Delhi (abbreviated IIT Delhi or IITD) is a public research university located in Delhi, India. It was declared to be Institute of National Importance by Government of India under Institutes of Technology Act. IIT Delhi is one of the two educational institutes in India which have been listed in Quacquarelli Symonds’ (QS) list of top 200 universities globally in 2015.

Delhi Technological University's departments of Chemical Technology and Textile Technology were shifted out en-block to mark the beginning of IIT Delhi at its campus in Hauz Khas. The Delhi Technological University is thus the mother institution of IIT Delhi. The school, originally named the College of Engineering & Technology, was registered as a Society on 14 June 1960, and classes began in August 1961. The school was later accorded the status of a University and was renamed as Indian Institute of Technology Delhi.

IIT Delhi is located in Hauz Khas, South Delhi. The campus of 325 acres (132 ha) is surrounded by the beautiful Hauz Khas area and monuments such as the Qutub Minar and Lotus Temple.The campus is also close to other educational institutions such as the Jawaharlal Nehru University, All India Institute of Medical Sciences, National Institute of Fashion Technology, National Council of Educational Research and Training (NCERT) and Indian Statistical Institute. 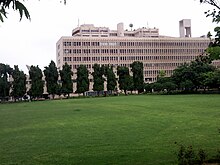 The inside of the campus resembles a city, with gardens, lawns, residential complexes and wide roads. The campus has its own water supply and backup electricity supply along with shopping complexes to cater to the daily needs of residents. 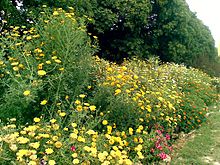 A garden in IIT Delhi

The IIT-D campus is divided into four zones:

The student residential zone is divided into two main sectors—one for boys hostels and another for girls hostels.

There are 13 hostels (11 for boys and 2 for girls), There are also apartments for married students. All the hostels are named after mountain ranges in India. These are:

The residential apartments are named after ancient Indian universities

Girnar House had the highest number of residents in 2011 with more than 700 students.[citation needed] Each Hostel has its distinct culture of sports and cultural activities. Hostels compete in inter hostel events to bring home various trophies which include the BRCA trophy for cultural activities and GC for Sports. BRCA trophy was won by Kumaon in 2016 when it was reinstated after being non-competitive for the previous 2 years. The GC was won by Jwalamukhi hostel in 2016 bringing an end to the 5 year reign of Kumaon hostel. Academic year ends with an annual function of hostels known as 'House day' in which the passing out batch and the freshers give various cultural performances and awards are distributed for outstanding contribution to various hostel activities.

The Student Activity Center or SAC is a part of the Student Recreation Zone in IIT Delhi. The SAC is for the extracurricular activities of the students. The SAC consists of a gymnasium, swimming pool, pool and billiards rooms, squash courts, table tennis rooms, a badminton court, a music room, a fine arts room, a robotics room and a committee room used to organise quizzing and debating events. The SAC also has an Open Air Theatre where concerts are hosted. Students can use the radio broadcasting facility (HAM) in the SAC although its use has declined over the years.

There are a number of student bodies in IIT Delhi, each with its own set of responsibilities. The highest student body in IIT Delhi is the Student Affairs Council (SAC). All the other student boards are included under the SAC, as listed below:

As the name suggests BSW works for the welfare of all the students of IITD.The BSW shall organise welfare activities from time to time and look in to other aspects of student welfare. The BSW shall provide financial aid to the needy students as per the decided rules.BSW has the responsibility of organising Speranza,the annual youth festival of IIT Delhi.

Under new structure, the BRCA consists of 9 clubs: Literary Club, Debating Society (DebSoc), Dramatics Club, Dance Club, Music Club, Photography and Films Club (PFC), Indoor Sports Club (ISC), Quizzing Club (QC), the Fine Arts and Crafts Club (FACC), in addition to the Society for the Promotion of Indian Classical Music And Culture Amongst Youth SPIC MACAY Delhi. Each club has a hostel representative working under the aegis of the hostel cultural secretary. The BRCA has the responsibility of organising the annual cultural festival of IIT Delhi, called Rendezvous.

BSP is the student managed board responsible for all journalistic and creative publications at IIT Delhi, bringing out 4 magazines, the Inception, the Muse, Sync I and Sync II; and 4 newsletters, the Inquirer, annually. The BSP also conducts the IIT Delhi's annual Literary festival – Literati each September, hosting a plethora of events that include panel discussions, guest talks, poetry recitations and literature quizzes. The Board serves both as a creative outlet, and as a platform to voice student opinion, organising numerous competitions and workshops throughout the year.

BSA is the Sports Board of IIT Delhi. It provides facilities for many sports such as Aquatics, Athletics, Badminton, Basketball, Cricket, Football, Hockey, Lawn tennis, Squash, Table-Tennis, Volleyball, Weight Lifting. The Board Council consists of President, Vice-President, Sports Officer, Sports Administrators. Also there are the posts of General Secretary and Deputy General Secretary, the candidates for which are elected from amongst the students by themselves. Besides this, there are 13 sports secretaries, one from each of the 13 hostels.

The Board monitors the sports domain of the institute. It is responsible for maintaining the sports grounds of different sports, conducting Inter Hostel sports competition, participation of IIT Delhi in InterIIT Sports Meet (the annual sports event of all the IITs). Apart from this, BSA is also responsible for conducting Sportech, the annual Sports Festival of IIT Delhi.

The annual technical festival of IIT Delhi, Tryst is organised by the CAIC......

The Entrepreneurship Development Cell (eDC), IIT Delhi is a cell which aims to support and augment the efforts of budding entrepreneurs in the college level to get established as a successful and independent entrepreneurs. eDC IIT Delhi wishes to inculcate and Enrich the entrepreneurial environment in India by creating an easily accessible and exhaustive set of resources for the entrepreneurs, which including the students, the budding professionals, mentors, angel investors and the venture capitalists through various fun-filled yet educating sessions such as Startup Showcases, competitions, eTalks and so on and so forth.

E-summit One of the biggest entrepreneurial platforms for academicians,newage entrepreneurs,eminent business personalities,venture capitalists and the students to gather at one place and share their entrepreneurial endeavours and experiences,and to pledge to take entrepreneurship to greater scales.